Russian pharmacy chains rating at the end of 2020

In January of this year, an event curious in all respects took place — the capitalization of the Russian Internet retailer Ozon exceeded the stock market valuation of the X5 Retail Group chain.

It is noteworthy that the revenue of the companies for 2020 differs by more than 10 times, moreover, Ozon did not plan to pay dividends in the near future. In fact, the company was given a truly enormous vote of confidence, which last year, of course, was fueled by the boom in the development of remote trade formats.

In different formats and at different times, both of these companies showed interest in Russian pharmaceutical retail, although last year the main events in the pharmaceutical retail sector took place without their direct participation. Russian banks set the pitch here — first Sberbank partnered with Eapteka, and a little later Gazprombank became a minority shareholder of the ASNA network. Despite the fundamentally different format of transactions, there is a lot in common between them; representatives of an almost pure e-commerce sphere, not burdened with significant off-line business, have been chosen for investments. On the one hand, this is also a kind of vote of confidence, but on the other, it's quite a clear stake on the format, which in the coming years claims to become a driver for the development of both large Russian retail and pharmaceutical retail, in particular.

At the same time, of course, we cannot say that the classic format has completely exhausted itself, especially if we take into account the artificial restraint of the online trade development in the pharmaceutical industry. However, given the current economic problems, the existing regulatory realities do not provide grounds for active development of offline trade, neither in terms of infrastructure nor in terms of the service. By the way, the same Sberbank, which, on the one hand, invested in pharmaceutical e-commerce, on the other, according to media reports, is initiating the potential sale of the Erkafarm chain, one of the leaders of the classic pharmaceutical retail in our country.

Yet, the prospect for online segment manifests itself more and more clearly every day. In the near future, marketplaces will be allowed to sell OTC drugs, there will be certainty regarding the possibilities of remote sale of dietary supplements. We only need to wait for "legalization" of the prescription drugs, and then e-commerce will be able to pay back to the voters of confidence with very good interest.

Tab. TOP pharmacy chains by share in the retail-commercial drug market in Russia at the end of 2020 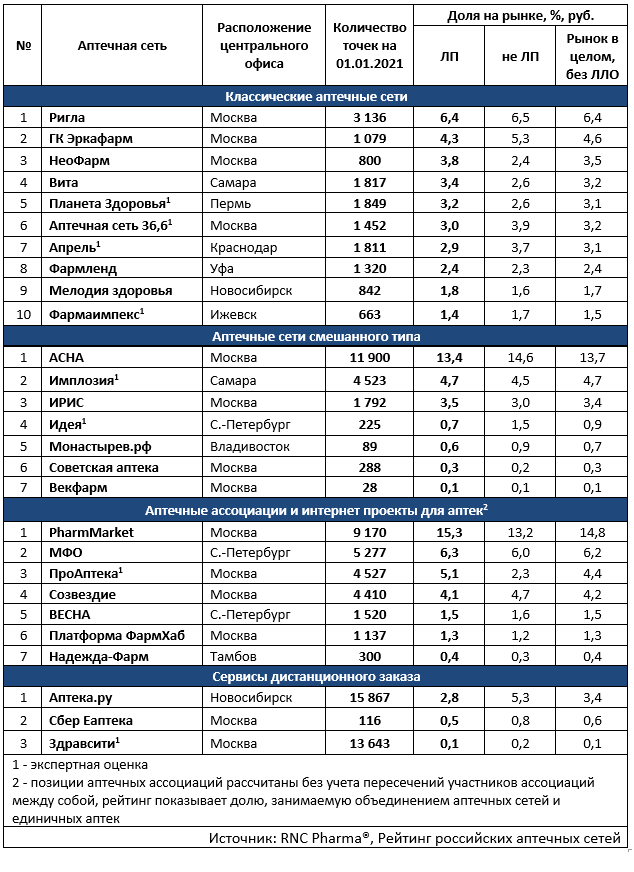